Neither the Lady nor the Tiger

“Nothing on the video. How long do you want me to keep looking?  Oh wait, here it comes again on the far left of the screen.  IT’S GONE! Professor it disappeared into thin air.”

“No young man, into a worm hole! It came out of one worm hole on the right, and then departed our corner of the universe via a worm hole on the left. And best of all, I have captured the exact location of both the entry and exit worm holes on our observatory’s radio telescope.”

“But Professor, our radio telescope is an old model, It isn’t capable of deep space observation.”

“Exactly! These worm holes are not light-years away. They are just a few hundred thousand miles above the Arctic Circle of our beloved Earth.”

“They’re that close to Earth, Professor?”

“Yes, isn’t it fantastic? We can reach them with existing technology!”

At this point, the head of the United Nations Space Agency, pressed something in his hand to stop the video playback on a super-sized overhead display, and he began to speak. “Now Astronauts of Earth, you know why you have been gathered here. You, the best of the best,  have been selected to represent our planet as we explore the universe, and bring a message of peace to all the inhabitants there of.”

I looked around the room as all assembled started to applaud. Counting myself, there were only two Americans among the astronauts. There were three Chinese, four Russians, an Australian, an Italian, and two women from “This” or “That”-astan. Every one of them was applauding as if the louder and longer you were able to slap your palms together and smile for the camera, the better your chances of making the final cut for a spot on the flight team. I was hardly clapping more than that which would be called “polite.” Because the whole, “Hey let’s all jump in a low orbit supply-shuttle and chase a UFO through a worm hole to who-knows-where idea-- fell flat with me. Sorry my fellow Super Hero’s, but the idea of the Great Unknown doesn’t exactly thrill me.”

That’s why I decided to stay home. I opted out. I became a Space Agency outcast. They retired me early, they tried to screw with me by sending my pension checks to the wrong address, they have even been repeatedly screwing with my medical coverage, but after seventeen years… at least I know one thing. I am still alive. I still go to bed at night next to my wife. Seventeen years and still counting.

As for those dozen Astronauts from around the world, who marched into a recycled, museum-display-space-shuttle, blasting up, up, and away, no one knows what happened to them seventeen years ago when they reached that blank spot in the night sky, that worm hole, and disappeared before you could blink… NEVER to be heard from again?
Posted by Donald E. Allen at 7:15 AM No comments:

I have not yet written today;
a trip to the dentist, then the drug store,
followed by the supermarket, the card store,
finally back to the drug store.
Now it’s getting late,
almost time for another painkiller.
Maybe I’ll wash it down with some Scotch.
Good scotch.
Can’t stand the cheap stuff.
Love the good stuff, one shot, maybe two.
Painkillers in different forms, pills and liquid.
Then maybe I can get something written.

I put on the TV
and look for some inspiration.
I see cops busting bad-guys,
Hawaiian cops and robbers.
I hit Channel-up and some old man is choking to death
on his own phlegm.
Don’t smoke.

Quickly I press Channel-up, again, and again.
Trying to Channel-up far enough—fast enough
to get away from my 30 years of smoking.
I Channel-up so far that I find myself Channel-down…
Channel-down and back in time.
I see Little Joe and Pa and Hoss;
an entire cast of dead people from long ago.

Email ThisBlogThis!Share to TwitterShare to FacebookShare to Pinterest
Labels: Poetry

The Disappointment of Raymond Bradley

“Mr. Charwoski, I think that if you listen to me for just a few minutes, you will understand why I am the most qualified person for the job of Sr. Accounting Clerk. You see Sir, I started here five and a half years ago as a Junior Associate Accountant. I worked the first four years of my career under the tutelage of Mr. O’Brien, and he taught me everything I know about the company. I was sad when he retired, but he is quite happy in Florida, and he has three cats to keep him company. He is also very active in his Senior Club and has served as the clubs Treasurer for the past three years. And—

Mrs. Johnston, stop looking at me like that, stop it, STOP IT RIGHT NOW!

You see, Mr. Charwoski, she hates me. She has hated me ever since I showed her expense report to the Independent Auditor’s Review Team. DON’T LOOK AT ME LIKE THAT. I’M WARNING YOU, MRS. JOHNSTON.

So, like I was saying, Mr. Charwoski, um, I have the most experience, and so when smarty pants Ms. Jones here, got the job instead of me it was very disappointing, and I think that if you could see the promotion review teams paperwork you would agree that I am much more qualified than her. But Mr. Brownell couldn’t find the paperwork in HR, could you Mr. Brownell, COULD YOU!”

“We have a phone wired directly into the conference room, Lieutenant.”

“My name is John. Raymond, can you tell me what is going on up there? There seems to be some kind of a big misunderstanding going on, and, well I think I can help. Will you let me try to fix things for you Raymond? But first you have to promise me not to hurt anybody, OK, Raymond?”

How can YOU fix things? You have no idea of how they treat me. They hurt me, THEY HURT ME ALL THE TIME.”

“Raymond? Raymond. Stay on the line with me, Raymond. Pick up the phone. Raymond?”

I just finished reading April 1861. It is an excellent example of historical fiction through poetic verse. I was never a big fan of poetry, But this book reads like a short story.it is very much a dedication to the bloodshed in this most terrible period of American history. Mr. Allen writes about all the things that brought on the American Civil War,such as the secession of the Southern States, and the attack on Ft. Sumter including Historical figures like Robert E. Lee and Abraham Lincoln.So if you like Historical fiction and the human spirit you will love April 1861.

My Memories of Troy

The Greeks had battled long and hard, but they could not penetrate the walls of Troy. Each side’s heroes eventually fought in individual combat at the foot of Troy’s mighty walls, but there was no final result to come of that bloodshed either. Then one day the Greeks sailed away, leaving behind a tall wooden horse. Was it a symbol of Greek acquiescence to the mighty walls of Troy? —Nay, it was to become an eternal symbol of treachery. I remember it well.

It was the summer of 1962, and my father was extremely mad at something I had done, or not done. So infuriated that he picked up my wooden toy chest and carried it out to the garage. I was banished to my room, alone, all my toy soldiers were in that toy chest now locked away in the garage on the far side of the house. My father really knew how to punish me, or so he thought.

While locked in my solitary confinement, I sought the refuge of reading. I took out a volume from my Golden Book Encyclopedia set, and it fell open to the story of Troy. How wondrous, if I only had my toy soldiers, surely I could find among them two different sets of Hellenistic toy soldiers to do battle, but they were all locked away, and out of reach.

I slowly surveyed my room, my mind empty except for the singularity of purpose, that purpose, my thoughts of recreating in my bedroom, the siege of Troy.

The result of my raw materials survey: The Golden Book Encyclopedia, twenty-four volumes. A box filled with pennies, and two, six-sided dice, one red, one gray. I smiled broadly as my fertile imagination bore fruit.

I laid my encyclopedia volumes on their sides, piled three high and staggered back about an inch—bound edge from bound edge, leaving enough room for two pennies to occupy the depth of the steps that the short staggered piles of books had created. When construction was completed, there on my bedroom floor stood, “The Mighty Walls of Troy.”

I then set about the task of separating my pennies into Lincoln memorials and wheat backs.  The Lincoln memorial is a building, so those pennies will represent the Trojans, the wheat backs will be the Greeks.  The dates on my wheat back pennies ran across decades, but my memorial backs were fewer in number and most of them were 1959, with some 1960 and 1961 pennies in the mix. This disparity in dates will work well in my game plan. I set my few dozen defending Trojan pennies on the walls of Troy, and arrayed before them two or three hundred, wheat back Greeks.

CHARGE!  The clash was calamitous. As opposing pennies came into contact they were flipped to their dated side, the dice were rolled, gray for the Trojans, red for the Greeks. The last digits of the penny’s dates were compared, and the difference, if any, was added to the higher numbered penny’s dice roll. Then the penny rolling the lower combined total, stayed on its flipped-over side; the losing penny was now a DEAD soldier.

At the end of that afternoon’s battle, hundreds of pennies, most of them low dated Greeks, lay dead before the walls of Troy, upon my bedroom floor.  The carnage lay heavy on my mind, and the smell of copper was thick upon my tarnish-tainted fingertips.

Then my bedroom door creaked and opened slightly. It was my Father poking his heads in to see what was up. He quickly closed the door and walked down the hall to where my Mother was in the kitchen preparing dinner. Then I heard him say in a loud and exasperated voice, “Son of a bitch, it’s impossible to punish that damn kid!”

You were right Father. I have always possessed the unique ability to adjust to, and overcome adversities in my environment. It is a talent that has served me well for all of my years.
Posted by Donald E. Allen at 4:09 PM No comments:

Email ThisBlogThis!Share to TwitterShare to FacebookShare to Pinterest
Labels: Memoir 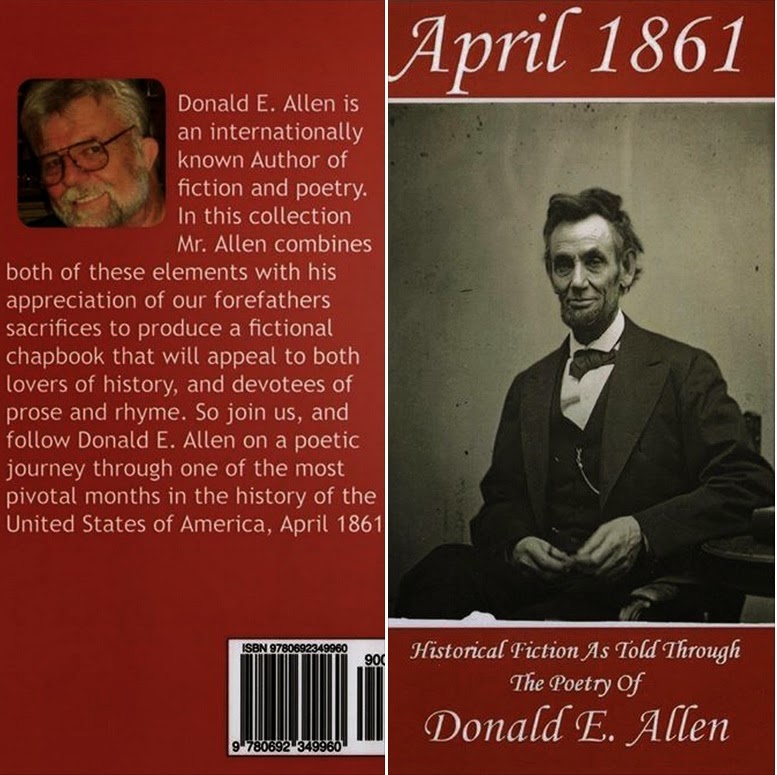 Listen to ... Neither the Lady nor the Tiger

Listen to The disappointment of Raymond Bradly